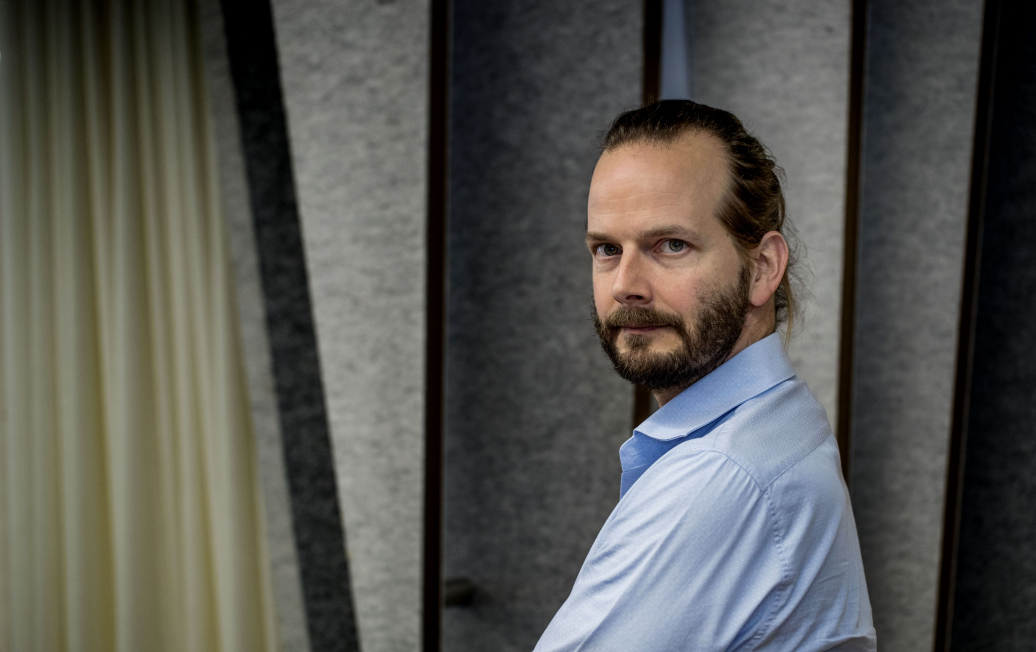 Very few Maastricht professors opt against having their own office, but André Dekker swears by flex-desks. This interview with the professor of Clinical Data Sciences takes place in a random meeting room at the MAASTRO clinic. Dekker will soon have a desk of his own, however, following the relocation of his department to the new UM building on the Paul-Henri Spaaklaan.

The nomadic style of working suits Dekker. His wife and his four children often used to join him on work trips, he says. “We’ve always travelled a lot, ever since my wife and I met in 1996 in Australia, where I was doing research at a cancer institute. Fortunately, we both do work that allows us to make long journeys now and then with the entire family.”

On the day of the interview, Dekker has just returned from India. During the state visit to India by King Willem-Alexander and Queen Máxima last autumn, his research group signed a cooperation agreement with the Indian branch of the computer giant Microsoft and the Apollo hospital group. With the help of artificial intelligence (AI), these two parties have developed a model that predicts people’s risk of cardiovascular disease. The algorithm is based on a treasure trove of data from six hospitals in the Apollo group. The model will now be validated in Maastricht. Going forward, the parties will also develop an algorithm that predicts the outcomes of cancer treatments. These are key steps on the road to personalised medicine – and, Dekker says, they are sorely needed. “When it comes to AI in healthcare, people tend to think of robots. Much more important for society is the use of AI to develop personalised medical and preventive models. Without AI, we in the Western world simply won’t be able to afford healthcare in the future. But it’s also indispensable in countries like India. All specialised hospitals there are concentrated in the big cities, and it’s AI that keeps healthcare accessible for people in the immense Indian countryside.”

The Dutch government, too, acknowledges the increasing importance of AI. In October the cabinet presented the Strategic Action Plan for Artificial Intelligence, including as an example of best practice a brainchild of Dekker’s: the Personal Health Train (PHT). Traditionally, medical data are collected and copied from one place to another. By contrast, the PHT comes to the required data. It functions as a kind of ‘train’ (actually a search query or algorithm) that drives past various data stations to analyse the information stored there – and not only data from healthcare providers or insurers. Consider a 40-year-old man who has a heart attack during the Rotterdam marathon. The treating doctor or a medical researcher may wish to compare the data from the man’s medical file with the data from his exercise app, Strava. The PHT makes this possible with the push of a button. Because the data remain at the source, the owner retains control of his own data, making the PHT a privacy-friendly way of handling medical data.

How exactly did this open-data system come about? “At the MAASTRO clinic, I helped to transform the IT service into a proper research department. We asked questions like ‘how can we make available all data from our research field?’ and ‘how can we learn from these data?’ Based on those questions, we started a project called EUROCAT with the tech company Siemens. It was actually a pilot to see if we could transfer large amounts of data securely between five universities in the Euregion: Maastricht University plus the universities and hospitals of Aachen, Liège, Hasselt and Eindhoven. This collaboration ultimately resulted in the PHT.” Academic hospitals from all over the world are now working on this model, together with organisations such as Philips and the TNO research institute.

Dekker’s research focuses on further improving healthcare with the use of AI. Naturally, this immediately throws up a multitude of questions: ethical questions, questions about historical data, questions about predictive value. On the latter point, Dekker sees only positives. “Doctors always look primarily at their own field when making prognoses. In the case of a cancer patient, surgeons focus on how much of the tumour they’ve been able to remove, oncologists are mainly concerned with the growth rate of the tumour, radiologists are preoccupied with monitoring possible metastases. And everyone forgets that it matters a lot whether the patient is married or not.” In a new, major research project, Dekker is working closely with Statistics Netherlands (CBS) to add demographic, social and economic data to his predictive models.